Jessie Cohen, Archaeological Collections Manager at Wesleyan University, hosted a visit by Professor Greenblatt’s History 247, Jewish History: From Biblical Israel to Diaspora Jews class. Students examined ancient Near Eastern coins related to places and times they have studied in class. The coins include, for example, one of Antiochus IV, villain of the Hanukkah story. Here are two pictures taken by Campus’ photographer, Olivia Drake. 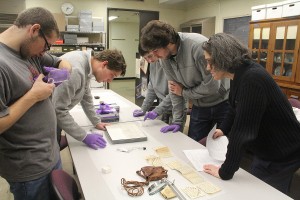 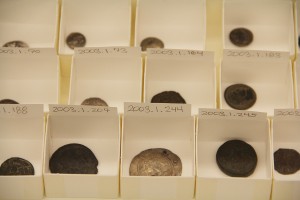 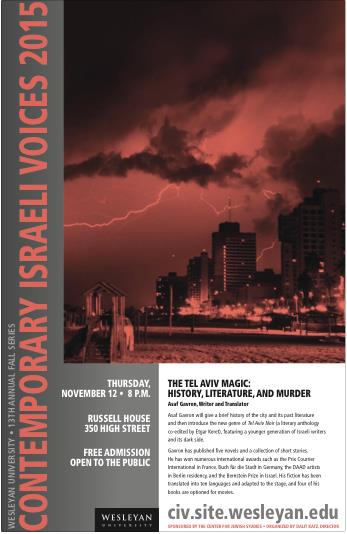 Tel Aviv Magic: History, Literature, and Murder, presented by the acclaimed writer Assaf Gavron on Thursday, November 12 at 8 pm at Russell House,  concluded the 13th Annual  Fall Series Contemporary Israeli Voices, 2016. Assaf Gavron gave a brief history of the city and its past literature and then introduced the new genre of Tel Aviv Noir, a literary anthology co-edited by Etgar Keret, featuring a younger generation of Israeli writers and its dark side.

Gavron has published five novels and a collection of short stories. He has won numerous international awards such as the Prix Courrier International in France, Buch fur die Stadt in Germany, the DAAD artists in Berlin residency, and the Bernstein Prize in Israel. His fiction has been translated into ten languages, was adapted to the stage, and four of his books are optioned for movies.

On Saturday, November 7, the Center for Jewish Studies presented a well attended and engaged conversation about the annual Israeli Film Festival. Here is the description taken from Wesleyan home page

For the eight consecutive year, Wesleyan Jewish and Israel Studies, with the co-sponsoring of the Film Studies Department, offered the annual Israeli Film Festival. This festival has become an extremely successful event which draws its audience from the Wesleyan community, as well as the larger general Connecticut community. Its structure has also become a model for unrelated festivals at Wesleyan and other universities. The festival’s format features a film screening, along with commentary from a speaker who illuminates a particular aspect of the film (based on expertise in film, Judaic Studies or cultural studies). The film festival is also closely integrated into the study of Hebrew at Wesleyan University. In this WESeminar, Dalit Katz, film designer and director, and Wesleyan professor of Religion and Israel studies, will offer a glimpse into this year’s festival as she shares film clips with the audience.
Presenter: Dalit Katz, Director of the Center for Jewish Studies and Adj. Associate Professor of Religion, has been teaching Hebrew and organizing Israeli cultural events since 2000.