The short fall break brings a little relief for everyone exhausted by midterms and papers.  Soon we will be back and JIS will present three events:

Thursday, November 7, 8 pm: Ron Leshem will talk about  “Israel as Number One Exporter of TV Shows”

Ron Leshem, is an award-winning writer and acclaimed novelist. With only two television networks – hardly 20 years old, barely profitable – faraway, isolated and war-weary, the Israeli industry has become a premier exporter of TV formats, from drama series to game shows and docu-reality. The production cost of a drama episode in Israel is parallel to the refreshments’ budget on a set of an American production. Yet Showtime’s “Homeland”, and HBO’s “In Treatment”, both adaptations of original Israeli shows, have expanded the influence of the young industry across the world.  The lecture will be at the Russell House. 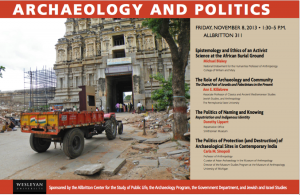 The program will include a coffee break, brief responses from two discussants, and time for general questions and discussion. 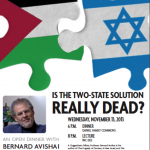 “Is the Two-State Solution Really Dead?”

A Guggenheim fellow, Professor Bernard Avishai is the author of The Tragedy of Zionism, A New Israel, and The Hebrew Republic, as well as dozens of articles on politics, business, and the Middle East conflict, and blogs at The Daily Beast and BernardAvishai.com. He is a former editor of Harvard Business Review and international director of Intellectual Capital at KPMG. His new book, Promiscuous: Portnoy’s Complaint and Our Doomed Pursuit of Happiness, was just published.

The lecture will take place in PAC 002

Please join us for the third event in the series Contemporary Israeli Voices 2013 on Monday, October 14, at Russell House at 8 pm. Dror Burstein, an award winning writer, will speak on  Why Aren’t There any Dinosaurs in Israeli literature?

Dror Burstein is the recipient of several major Israeli prizes. In 1997, he was awarded the Jerusalem Prize for Poetry and in 2002 the Ministry of Science and Culture Prize. His first novel, Avner Brenner (2003), was awarded the Bernstein Prize in 2005, and was followed by a short prose book, Twin Cities (2004). His second novel Murderers was published in 2006 and a year later he published a documentary book Without a Single Case of Death about the Ghetto Fighter’s Kibbutz. This book was translated into English in 2007. His latest books Kin and Netanya were also translated into English as well as other language. Since 2011 he  has been editor of the poetry journal Helikon.