Friday, May 20 at 1:30 p.m: Objects Tell Stories: Community Partnership and Scholarship at Wesleyan 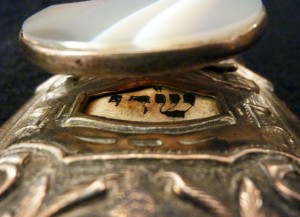 During the spring semester, students in Professor Magda Teter’s class on east European Jewish history have been exploring studying history through objects. This was possible thanks to a new partnership developed between Wesleyan and the local congregation Adath Israel. The congregation houses a small, but impressive, collection of Judaica. Students in this class examined, researched, and curated an exhibition using objects related to East European Jewish history. The seminar will showcase the students work by taking participants on the tour of the exhibition and will aim to highlight the exciting experience such collaboration with a local community can bring. Two students will share their stories.

Saturday, May 21 at 1:30 p.m: What Good Is A Red Tent If You Hate Camping? Reflections on 21st Century Jewish Motherhood. 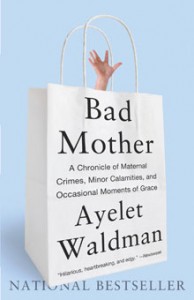 Ayelet Waldman ’86, novelist and author of Bad Mother: A Chronicle of Maternal Crimes, Minor Calamities and Occasional Moments of Grace, will discuss the perilous imbalance of contemporary motherhood, with a particular emphasis on the pleasures and challenges of being a Nerf-spined, guilt-ridden Jewish Mother in an iron-willed, Tiger Mother world.

Introduction: Dalit Katz, adjunct assistant professor of religion and of Jewish and Israel Studies. Presenter: Ayelet Waldman ’86 is the author of Red Hook Road, Love and Other Impossible Pursuits, Daughter’s Keeper and the Mommy-Track Mysteries 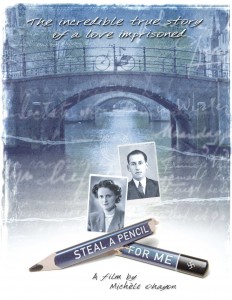 In this seminar, film director Michele Ohayon will present segments from her award-winning documentary Steal a Pencil for Me (2007), as well as segments from her college graduation film, Pressure, which won the Israeli Best Film Award in 1984. Both films are love stories, framed within specific historical contexts. The first film tells the story of Jack and Ina who fell in love while imprisoned in a Nazi concentration camp. Pressure is one of the first dramatic films on the Israeli-Palestinian conflict, and is based on a true a story.

Michele Ohayon will conduct a question/answer session with the audience, and walk through the process of depicting history in film.

Introduction: Dalit Katz, adjunct assistant professor of religion and of Jewish and Israel studies. Presenter: Michele Ohayon P’14, award-winning director and producer, whose feature length documentary Colors Straight Up won various awards, including the Golden Spire Award for the Arts at the San Francisco Film Festival, and was nominated for an Academy Award.

Join us to celebrate a new partnership between the Adath Israel Congregation and the Olin library at Wesleyan.

The event will also be an opportunity to share the results of student research based on objects from Adath Israel’s Museum.

Light refreshments will be served.

After a very busy semester of Jewish and Israel Studies events, our almost last event is on Sunday, May 8: Mogulesco-A Tale of the Yiddish Theater, a production of Music 297 class, written by Mark Slobin, directed by Joshua Margolin ’11, music direction by Amanda Scherbenske.With student and faculty actors. 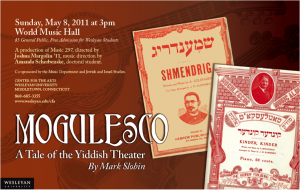 Please join us for this student-faculty performance.