On Tuesday, May 3, 2011, at 4:30 pm I hope you will join me for a celebratory reception of our students’ achievements.

Daniel Hymanson (FILM) will present his short film “Slothman” – Daniel’s honors thesis project for the film studies department.  It tells the story of a boy named David and his encounters with sloths, the Chicago Bulls, a newt, and his mother. The film’s opening scene was shot at Adath Israel in Middletown.

Seth Alter (HIST and JIS) will demonstrate his new educational video game “Divided Monarchy” that simulates ancient Israel in the Iron Age. The game comes with serious academic research historical and archaeological material. Every in-game component to “Divided Monarchy” has been included in accordance to modern scholars’ understanding of biblical society and culture.

On Tuesday evening, our student Ross Shenker (THEA and JIS) will share his capstone project in a very special event Inside The Playwright’s Studio: An Evening With Donald Margulies

Join Pulitzer Prize Winning Playwright Donald Margulies and Ross Shenker ’11 for a look inside the playwright’s studio. Professor Margulies is the acclaimed author of the plays “Time Stands Still,” “Brooklyn Boy,” “Dinner With Friends,” Sight Unseen,” “Collected Stories,” and others. He has received a Lucille Lortel Award, an Outer Critics’ Circle Award, two American Dramatists’ Guild Hull-Warriner Awards, one Tony Award nomination, five Drama Desk Award nominations, two Pulitzer Prize nominations, and one Pultizer Prize. His works have been performed on and off Broadway and at major theaters across the United States, in Europe, and around the world.

Presented by the Jewish and Israel Studies Department. This event is in partial fulfillment of Ross Shenker’s Senior Project entitled “Embedding The Self In One’s Art: How Donald Margulies Draws Upon Contemporary Jewish-American Identity In His Playwriting.”

Reception to follow next door in Andersen Meeting Room-110

On April 28, the long-awaited Frankel Memorial Lecture will include a screening of  “Farewell to My Country” a documentary by director Andrzej Krakowski about the 1968 exodus of the Jews from Poland. 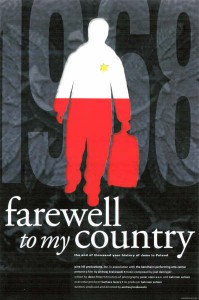 1968 was a turbulent year across the world. But in Poland, it became the last chapter of the centuries-old history of the Jewish community there.  That year, following student demonstrations, the Polish communist government incited anti-Zionist sentiments that led to the expulsion of Poland’s last remaining Jews, effectively ending the history of what was once the largest Jewish settlement in the world. FAREWELL TO MY COUNTRY tells the story of the silent elimination of the remaining Jewish community by the communist regime.  Using rare and never-before-seen footage, the film intimately reveals the experience  of emigrants by way of the communists’ state-sponsored persecution.

Joining us for the evening will be the director of the film Andrzej Krakowski, a filmmaker and a professor of film studies at City College, NY. Andrzej Krakowski is a producer, director, and screenwriters of many films, film series, and documentaries.  Among films with which he was involved in his many capacities are “The Triumph of the Spirit” with William Defoe, and “Eminent Domain” with Donald Sutherland.  He is also a producer of a TV Series “We are New York.”
April 28, The Goldsmith Family Cinema, 8pm

Spring brings new flowers, new leaves, warmth, and in May the end of the semester.  But it is also a season of Passover and Easter, a season of celebration and devotion, at times, even of commemoration of sometimes painful events marring centuries of Jewish-Christian relations.

There are books that could enrich this season, bringing history closer–some of them taken from syllabi of courses in Jewish and Israel Studies at Wesleyan. 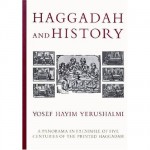 Yosef Hayim Yerushalmi’s Haggadah and History (JPS, 1997).  Through the history of the printed Haggada, Yosef Yerushalmi, the late distinguished professor of Jewish History at Columbia University, takes the reader — and the viewer, since the book is splendidly illustrated — through recent centuries of Jewish history.  For the haggadot were adapted to new tastes, cultures, and places.  The book was nominated for the Pulitzer Prize when it was first published in 1975.

But how did the Haggadah develop? There are different interpretations.

In his provocative book Two Nations in Your Womb: Perceptions of Jews and Christians in Late Antiquity and the Middle Ages (U of California Press, pbk, 2008), Israel Yuval, a historian from Hebrew University in Jerusalem, traces the development of the Haggadah to a dialogue between early Christianity and Judaism in late antiquity and the medieval period, arguing that Christian Easter rituals were crucial in shaping the Haggadah.

And although these accusations ended before the modern era, Passover and Easter were times pregnant with tension and potential for violence.  Edward Judge’s Easter in Kishinev: An Anatomy of a Pogrom (NYU Press, pbk 1995) documents the dynamics surrounding the notorious pogrom in Kishinev in 1903.  The pogrom led Hayim Nahman Bialik, the renowned Hebrew poet, to pen his moving poem “In the City of Slaughter.”

Spring is also the season of commemoration of the Warsaw Ghetto Uprising.  Samuel Kassow’s Who Will Write Our History?: Rediscovering a Hidden Archive from the Warsaw Ghetto (Vintage, 2009, first published in 2007 by Indiana University Press).  The book tells the story of Emmanuel Ringelblum, a Polish Jewish historian from Warsaw, who established a secret organization with a code name Oyneg Shabes in the Warsaw Ghetto charged with documenting Jewish history and Jewish war experience for posterity.  Preserved in tin boxes and milk cans, thousands of documents afford us a better understanding of Jewish experience during WWII as experienced at the time.  The New Republic called Kassow’s book one that “may well be the most important book about history that anyone will ever read.”